Sutton turned 300 years old in 2004, and to commemerate the event the town decided to build a park along the Blackstone River. It took them a few years, but the park is now complete! It resides in the northeast corner of Sutton, where the Blackstone River barely nicks the town of Sutton before continuing its way south towards Grafton and Northbridge. 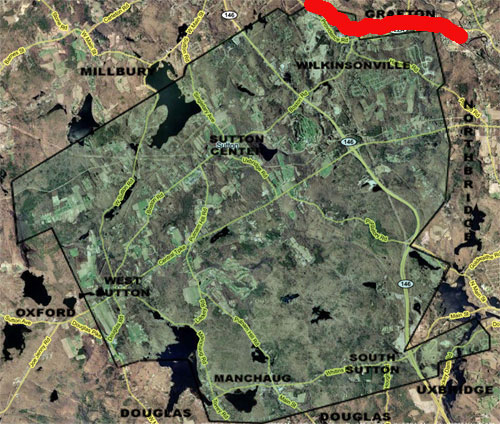 These series of photos were taken on September 30, 2009. The Mass government was doing water tests on this day - claims were that red dye put into the river up in Worcester would turn the entire river red for the afternoon. However, these photos show that the river was quite normal looking! The canoe spot looks rather tricky - someone has to head straight for the waterfall, then turn right at the very last moment and go upstream to get to the landing area. I would be terrified of being swept over the waterfall!

The pictures on the topic of Sutton Tricentennial Park for this slideshow were all taken by Lisa Shea.