The deer tick or blacklegged tick is definitely a tick to be able to identify. It likes to latch onto humans and pets, and it carries the Lyme disease as well as other diseases. This tick is most definitely found in Massachusetts. It has four stages. First it's laid as eggs. Then the eggs hatch and a nymph comes out. The nymph feeds once, then morphs into a larva. The larva feeds once and morphs into an adult. The adult feeds, then lays eggs. So you can't get infected by a nymph because they can't be born with Lyme disease in them. You can only be infected if the nymph had fed on something with Lyme, and now it still has that Lyme bacteria in it as a larva or adult.

The following photos of an adult deer tick were taken by me and my boyfriend on May 9, 2012 in Sutton Massachusetts. I went out in my back yard for a few minutes to take some photos of flowers, and when I got back in I sat at my computer to sort through them. I felt a tickling on the back of my hand. There the tick was, crawling across my hand! It was about the size of a large freckle. I have a half dollar in some of the photos to give a sense of scale. So it wasn't the "tiny pinpoint" of a larva tick. This was a full sized adult female tick. But it also was not "huge". I thought at first it was a small spider, until I realized it had the distinctive tick shape.

In comparison, here are a set of photos from June 11, 2013. This is the smaller nymph form of the deer tick. So if I had let it feed on me, it would have then turned into an adult. The nymph is photographed on a penny. It was the size of a medium sized freckle :). OK, hard to describe. It was bloated with my blood, so the actual body itself would be quite tiny. Probably the size of a single letter on the penny.

Here's that same nymph deer tick (a day later) shown side by side with the much larger adult dog tick. Dog ticks are MUCH larger than deer ticks are. 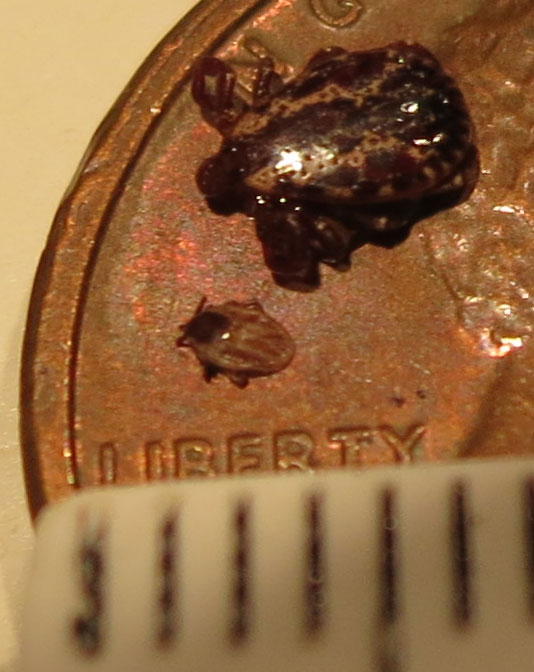 This last photo shows the underside of the deer tick nymph.

Ticks do fall into the arachnid family, so they are related to spiders. Larva deer ticks only have six legs, while the nymph and adult stages have eight legs. While most spiders are quite helpful, I would not consider a tick a helpful creature to have around the house or yard. The way to kill them is to drop them into alcohol (vodka etc). You cannot drown them or squish them reliably. Normally I am against killing any creatures, but I'm afraid I make an exception for ticks.

The female deer tick has eight brown legs, each with a tiny hook at the end to help her hang on to her host. She has a long, narrow head and then a circular dark area on her back. The rest of her body is a large orange-red sac which is what fills up with blood when she feeds.

For more details about the dog tick, visit my Dog Tick Photos

For complete photos of all stages of the deer tick, you can see the deer tick page at TickEncounter - Deer Tick