Three Variants The Dimorphic Jumping Spider is less than half an inch in diameter. It is technically known as Maevia inclemens. It can jump up to 50 times its length! These spiders are very jump-happy. They will leap on just about anything they see.

I called the gray male form of this spider a "speckled spider" until we figured out exactly what it was. They have amazing camouflage and can blend right in with their surroundings. All of these photos were from dimorphics that were found on our back porch in Sutton. They are fairly common there - we get at least 2 or 3 of each kind each year.

The reason these spiders are called "dimorphic" is that the males can come in two different color styles. There is this gray color scheme, called the "gray morph", and another style that is all black body which is called the "tufted morph". They look wildly different from each other. We have both kinds in Sutton! This is one of the only cases in nature where there are two radically different types of males, with very different courtship patterns and looks, but they both mate with single female style.

Even more interesting, whichever type of male the female spider mates with, she ends up having offspring of both colors. However, all the male babies look like the gray style when they are little. It's only when they molt to their adult form that the tufted ones take on their unique form. I imagine that's because when they are black, suddenly they are far less camouflaged :)

Click on a given photo below to get the full set of photos for that type of spider. 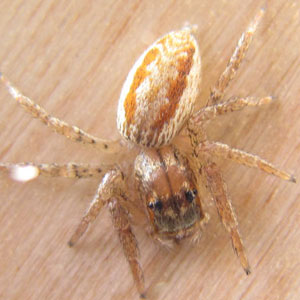 Female Dimorphic Jumping Spider
There's only one female form - all females look like this. 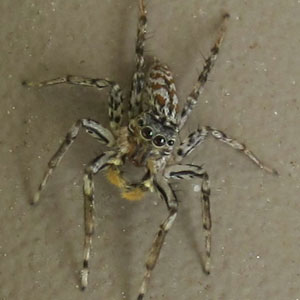 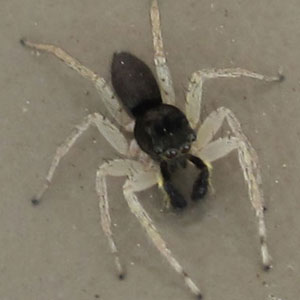 Male Dimorphic Jumping Spider - Tufted Morph
This is called a "tufted morph" because it has cute tiny tufts. Why don't they call it a black morph? That seems far more sensible to me. In any case, as you can see, this version looks radically different and most people wouldn't guess it was also a dimorphic jumping spider.

Here's a video of the black form of the dimorphic jumping spider, showing off its jumping powers.

Interestingly, according to an article in the Journal of Arachnology, the females seem to have equal preference for the two types of males - but it depends on how close or far away she spots them. If the male is close, she prefers one, and if the male is further away, she prefers the other! Apparently the two males have different styles of courtship.

Here's another article which talks about the two types of dimorphic spiders, from Evolution -