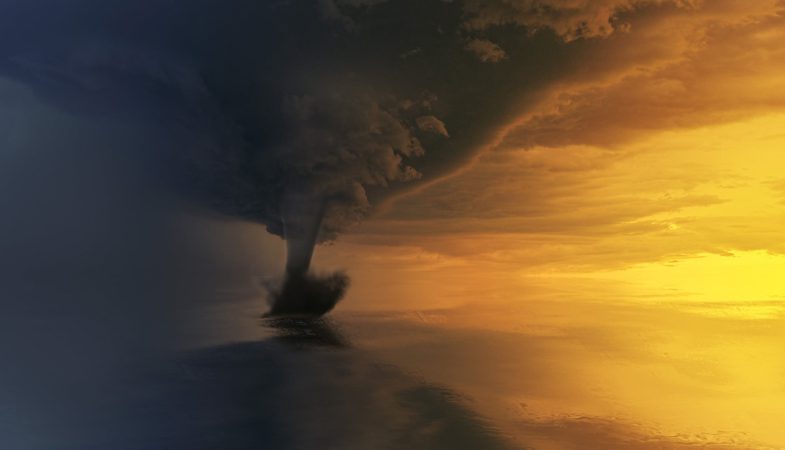 Sunday Sutton History! This is from “History of the Town of Sutton Massachusetts from 1704 to 1876”:

In June, 1831, a tornado, commencing on Manchaug Pond, passed through Asa Putnam’s woods and across the lots to Perley Waters’. In its passage, it spared nothing that came in its way. It tore up trees by the roots, breaking off branches eight inches in diameter, carrying them one hundred feet into the air, and scattering them all about. It struck an old cider-mill located near where Asa Dodge’s hog-house now stands filled with lumber which Rufus Bacon had been accumulating to build him a house, entirely demolishing the whole thing. The building, lumber and all the lumber principally boards was split into slivers and scattered broadcast over acres of land. Even the mowing lots of Captain Hall were covered with the debris; the slivers sticking upon the grass like the teeth of many inverted harrows.

Just as the wind struck the cider-mill, Paris Tourtellott opened the west barn doors, in order to drive in out of the rain. His wagon was loaded with pike-poles, for it was the day he raised his house at West Sutton. When he opened the doors on the west end, the wind made a larger opening on the north side, taking out about thirty feet, leaving him outside in a literal shower of pitch-forks and pike-poles. “When I reached him,” says one who went to his aid, “he was the palest live man I ever saw; his hat was gone, his face was speckled with small pieces of green leaves, as nicely adjusted as so many patches of court-plaster. The hind part of his wagon was down in the pasture below the barn, and the pike-poles were scattered hither and thither. The seat of his wagon was found some forty rods away in Capt. Hall’s orchard.”

When Esquire Putnam built his house, he hired Abner Sibley to set some elm trees around his yard. Six of them now stand in front of the house. When the tornado struck these trees, raising their branches high and almost transforming them into the shape of Lombardy poplars, it found its match. They were too strong even for a whirlwind. They severed it in twain, its feeble branches passing one each side of the house. The salvation of the house and perhaps of its inmates, is due to these noble centennial trees. There they have stood one hundred years, a living monument to the enterprise of Nathan Putnam and his faithful employee, Abner Sibley. Though Putnam and Sibley are both dead, these beautiful trees still live, coeval with our national independence. There let them stand, never to shed their dew-drop tears over the death of our great republic.

« Comb Making in Sutton MA
The First Settlers of Sutton »