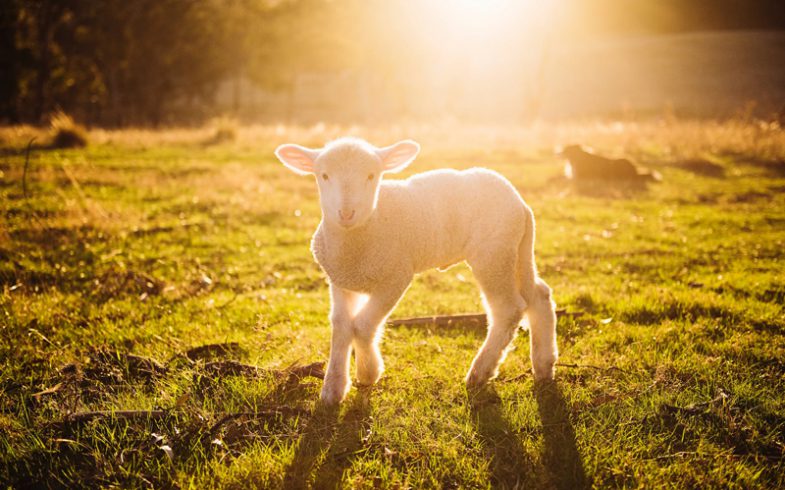 … as sheep are becoming nearly extinct, and bid fair to be sought after by the future Barnums as curiosities, let me tell you a little sheep story of my own.

In the spring of 1827 we turned our sheep into a pasture adjoining this farm, known as the woods pasture. We soon after missed one of the lambs, and came to the conclusion that it had been killed by the dogs or foxes. Its dam was constantly moaning her loss, and like Rachel would not be comforted; she would come to the bars and call for help, as well as a poor old sheep could call, but no one could understand her language until my little dog, Tray, no sheep-killer, went to her assistance and returned to me for aid. He actually took hold of my clothes and led me to the pasture.

I knew by his actions that he meant business, so I followed him to the lost lamb, still alive, but nearly dead; cast in the fissure of a rock, and so imbedded there I had to get my grandfather to help me before I could extricate her. Poor thing! she could not stand nor hold her head up.

We carried her home and faithfully nursed her, the faithful dog meanwhile watching over her and licking her sores until they were healed. It was several days before she could stand. As soon as she could walk I used to take a handful of oats in my hand and let her eat them therefrom. So if I said “oats,” she would come for them; and, in tine, that became her name.

From sympathy she became the pet of the household, and was allowed to run in the house-lot until fall, when the oats and the choice feed had made her so fat that my grandfather, thinking her better for mutton than for wool, proposed to kill her; he even got his knife for the slaughter, when the confiding creature came and licked his hand. I asked him how he could take her life, when we had taken so much pains to save it. I said, see how she loves you! I would as soon eat one of my own brothers!

Just then “Uncle Salva,” as we all called him, came up, and I asked him to buy the lamb to keep. He said he would give two dollars for her, and so she was sold to him, for the knife had already fallen from the Captain’s hand, and the tears were dropping from his hooked nose.

Ten years after, while engaged in the store, I rode up to the old Baptist church place, and walked across to my father’s. On my way I started up a small flock of sheep; they seemed scared at first, ran a little way, then stopped and looked at me. I thought one of them looked like “Oats,” so I held out my hand and said “Oats,” when she came forward and licked my hand as if in gratitude for her life. A little further on I found “Uncle Salva,” and asked him if Oats was alive. He said yes, and she and her descendants formed his entire flock. She had been the most profitable sheep he had ever owned.

Material sourced from: History of the Town of Sutton Massachusetts From 1704 to 1876