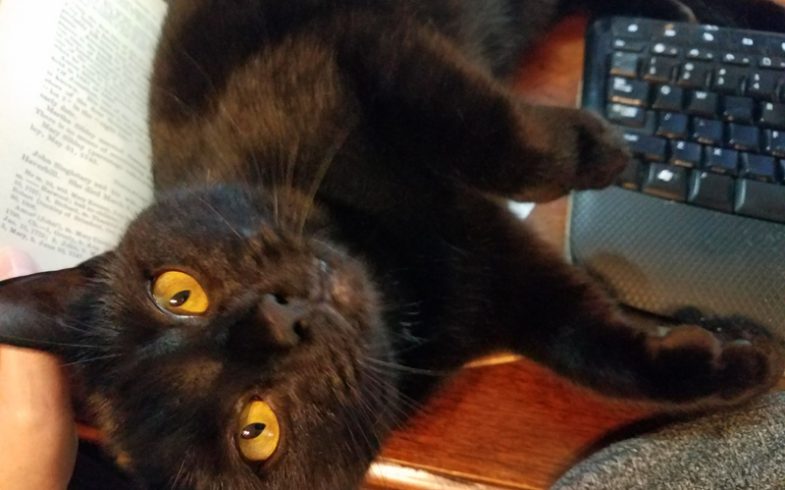 Happy Easter! It’s Sutton History Sunday so I went looking in the Sutton History book for something inspirational. Remember, this book was published around 1876. Zuzu the cat, every time I open up this historic book, plunks herself right on top of the pages and refuses to leave. Apparently she loves history. I guess if this book has survived over 100 years it can deal with a little cat fur …

Now, on to the story.

He was the first male child born in town. It is said that he never attended school a day in his life. The rudiments of reading, writing and arithmetic, were taught him at home. He made the most of his opportunities, and by patient application, became a well informed man.

He was of quick perception, sound judgment and sterling integrity. For four years, during the revolutionary war, he represented the town in the provincial Congress, and after the formation of the State government, he was for four years in the house of representatives and several years in the senate.

He was also a justice of the peace, and a justice of the quorum, of which there were two in the county. One of the duties of the latter office was to administer the debtor’s oath to men put in jail for debt.

Esq. Singletary was often sent for to perform that service, as his colleague, who resided in Worcester, refused to do it without the fee in hand. Often in the evening, after his day’s work was done, did he ride to Worcester, moved with compassion for the poor debtor, and administer the oath, taking for his pay promises which were seldom fulfilled.

Mr. Singletary was an earnest Christian. His grandson, Rev. S. A. Dwinnel, says his conversion was brought about through the influence of a young lady, Mary Curtis, to whom he was engaged. She was one of the subjects of the religious interest which attended the preaching of Jonathan Edwards, of Northhampton, who visited Sutton in February 1742. They both united with Dr. Hall’s church at the same time, and were dismissed with others, to form the church in the north parish, in which they are spoken of as pillars.

The following anecdote, furnished by Rev. Geo. Allen, Worcester, who knew both the persons referred to, illustrates Mr. Singletary’s quick insight into character, and his concise method of making its defects manifest.

“During a season of revival in the north parish, Mr. Samuel Waters, a manufacturer of hoes in what is now Millbury, being under concern of mind, and seeing Mr. Singletary approaching, rushed out of his shop, and called out, ‘O Squire! O Squire! what shall I do to be saved?’ The Squire scarcely stopped the horse he was riding as he replied, ‘Put more steel in your hoes.’”

He had a family of nine children, all girls but two. All sustained honored positions in life and the church, except his youngest son, who was a profligate, and brought much trouble to his parents. After having a large family, which grew up and left him, his son Amos became a town pauper of Millbury. For twenty or thirty years he never took a bible in his hand or heard a prayer if he could avoid it. Mr. Dwinnel says:

“When I was at home on a visit, from Philips academy, Andover, in 1833, I visited him for the purpose of religious conversation. He was living in an irreligious family, and was then about eighty years of age. I found abundant evidence, from talking with him, that God had met him there and changed his heart. He showed me a bible that he had obtained and read in every day. He lived some years afterward, giving evidence of the great change. God does indeed remember his covenant with his people. How precious the truth!”