The Deer Tick, Ixodes scapularis, is also known as the blacklegged tick. This type of tick is fairly tiny, and it causes Lyme disease. So it's hard to find if it's attached to you - and it's important to get it off.

Once you get the tick off your body, you want to figure out if it is indeed a deer tick or something else. I have a page on Deer Tick vs Dog Tick. So we'll assume that, at this point, you do know that you have a deer tick on your hands.

Adult deer tick on a half dollar - 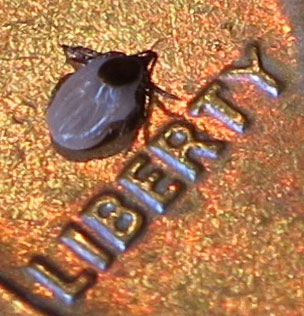 So the first question you want to ask is, did it feed. Look at its blood sac area - the back of its abdomen. Does it look small and oval, like in the first photo? Or is it bulged out and grey, like in the second? The larger that sac, the longer the tic has fed on you. Tick disease doesn't transmit instantly. There has to be a long period of connection before the bacteria in the tick can get into your body. So if it's been on you for less than 24 hours, you're pretty safe. If it's been 24 hours or longer, then there is more chance of transmission.

The next question is if the tick even has any bacteria in it. Here is the CDC Lyme Disease Map updated yearly. If you live somewhere that barely has any lyme disease in the first place, you're probably fine. If you like smack dab in the middle of Lyme Disease Central, it's far more likely that this tick did have the bacteria in it.

The bacteria in question is Borrelia burgdorferi sensu stricto. Did you know it was only 1981 when researchers finally realized that lyme disease was caused by a bacteria? Amazing. And here we think we live in modern times :).

So let's say you live in Lyme Disease Central, are sure the tick you just pulled off your leg is a deer tick, and it was bloated so it was on you for more than 24 hours. Now what do you do?

We all hear the stories of nasty cases of lyme disease - but as with much in life we only hear the worst of the worst stories. Still, it's good to take care of your health. Now that doctors know about the lyme disease bacteria, treatment is fairly easy.

Step 1 - get antibiotics within 72 hours. This is the best course. They give you one dose of doxycycline and poof you're done. It pretty much takes care of everything. It really doesn't have side effects so there's no reason not to take it (for most people of course).

Step 2 - watch for symptoms. This is true whether or not you get the doxycycline. See if you get a bulls-eye rash around the location. Note that not everybody gets the rash! So it's not an absolute sign. Still, it's good to watch for. Also watch for flu style symptoms. When I got bitten by a deer tick nymph on my ankle, I got a red spot the size of nearly 1/2 inch which was hard. I drew a magic marker circle around its edges, so I could track its change. Two days later it had reduced in size, so I knew I was fairly safe. This photo is from the two days later. You can see the faint marks of the magic marker circle at the edges of the pink area.

Step 3 - About two weeks later, get a Lyme Titer - i.e. a blood test. Note that when I got this above tick bite in June 2013, the doctor on call didn't want to give me the quick-dose of doxycycline - he wanted me to come in for a lyme titer instead! That makes no sense. Your body needs time to build up the antibodies to an attack. So after only a single day or two, there won't be enough antibodies in my system to trigger a test result! It would have come back negative. You want to do the test after your body has time to make the antibodies. Not to worry. If you're positive at that point, you go on a 2-4 week regimen of antibiotics and are set.

So yes one day of antibiotics is better for your body than 2-4 weeks. Still, both are manageable. Especially since even in Lyme-happy places the chance of actually getting Lyme from a deer tick bite is around 3%. So if you don't get that quick-dose, you'll be fine. Chances that you have Lyme are quite low. And if you do have it, it can be handled.

Step 4 - Get the Tick Tested. There's really no need to go dosing yourself with chemicals if the tick doesn't even have any bacteria in it. For a mere $40 you can send your tick off to the Amherst MA Tick Testing Facility and they'll email you back in a few days with the results. A search on June 13, 2013 for ticks found in Sutton revealed they'd done this testing. Note that there is just one red result, which is for Lyme.

So for eight people who went through the trouble of sending in their ticks for testing, only one of those ticks actually had lyme disease. The other seven were benign ticks.

Also note that, when you (the human) test your blood for lyme, a lyme test will show up positive if you've been infected with lyme in the past. So you could get a positive result even if this specific tick that just bit you didn't have lyme in it. Deer ticks are so tiny that a person could easily be bitten and infected without ever realizing it.

So I'm almost of the mindset now that every adult in Lyme country should get themselves tested every ten years or so. Just in case. It's an easy enough test, and it can help catch infections that might otherwise linger for years.

To see full details on the deer ticks, visit my Deer Tick Photos